A recent study by Ford motor company showed that over 90 percent of EV owners plan to buy a second electric car in the future. Nick Peterson, a 9th grade counselor at Fossil Ridge High School in Fort Collins, is among this majority. Nick is one of the many EV owners who couldn’t go back to gas when the lease ran out on his Nissan LEAF in August.

Nick, an EV advocate and owner, bought his first electric car in 2012. He purchased the LEAF for numerous reasons including increased fuel economy, decreased maintenance, and a strong interest in sustainability. “I was absolutely fed up with having mechanics rip me off, all the fees and maintenance, not to mention the expensive gas and price fluctuations,” Nick explained.

The benefits of making the switch to electric came right away. “The cost savings are remarkable,” he said. Nick’s electric bill barely changed after starting to plug in, even while driving 1,000 miles a month, saving a significant amount of money in fuel costs.

Those savings helped Nick purchase his Tesla Model S 70D in 2015. He wanted an electric vehicle that could serve as his only car. “The LEAF worked for 95 percent of my driving, but I wanted my next car to be an EV that could meet 100 percent of my driving needs,” he said. Coupled with tax credits and the cost savings that come with driving electric, the Model S was a logical choice for Nick—the federal and state incentives played a big role in Nick’s decision to buy the Tesla Model S instead of leasing one.

Two fun advantages of being an electric vehicle owner for Nick are the performance and the ability to pass gas stations without worrying about the fluctuating prices or stopping to fill up.

“Number one: being able to pass anyone off the line at a red light, which goes for the LEAF as well… but what is also fun is never having to stop for gas or waste my money on maintenance.. It’s just wonderful to not have to worry about that.”

While Nick hasn’t yet had the opportunity to take his Model S on a road trip, he has plans to travel to Las Vegas in December, putting the estimated $200 he will be saving on gas in the slots.

Nick believes he’s a contradiction to the stereotypical Model S owner, living proof that if you are able to put some money down, the Model S and EVs in general are affordable and not nearly as expensive as many believe them to be. When discussing the topic, Nick jokingly says, “We might have unearthed the world’s poorest Tesla owner. There’s a cache that goes with Tesla, but if you’re driven, it can happen. And they aren’t as expensive as one might think, especially when you consider the incentives available.”

Unsurprisingly, one of the most common questions Nick receives about his Tesla is, “Can I drive it?”

If you are interested in learning more about the Colorado tax credits or how you can save money by driving electric, visit our website or contact Annie Freyschlag at afreyschlag@electrificationcoalition.org or 970-987-3055.

DENC met Nick back in 2013 and had a guest blog on his then, Nissan LEAF. To read his initial blog feature click here. 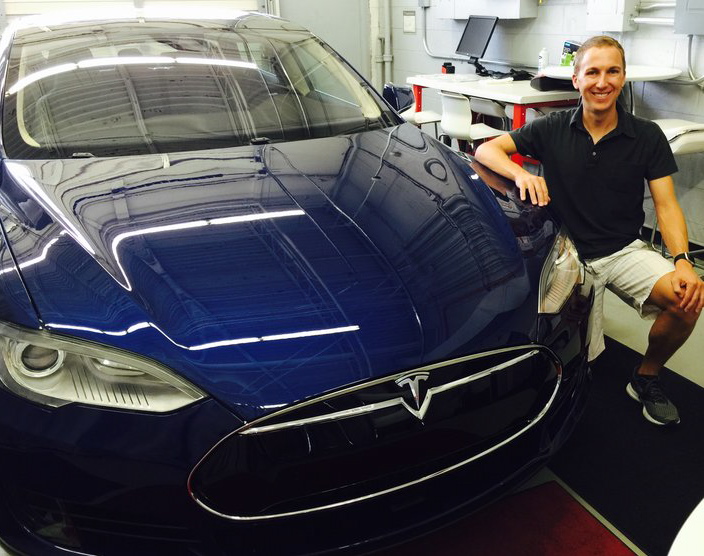 Fort Collins Workplace Charging Partner Launches Stations
Video: You Can Save Up to $13,500 This Year With an EV