DENC Pulls Off the Largest EV Rally in Colorado History 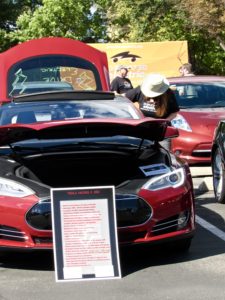 This was an important milestone for the region as Drive Electric Northern Colorado has been working to turn Northern Colorado into an EV community for more than three years. The goal of the National Drive Electric Week EV Rally was to demonstrate how many EVs are now on the roads in our community, both to continue encouraging EV adoption, and to recognize those community members who are already plugging in.

The event featured EVs from most major manufacturers including BMW, Chevy, Ford, Nissan, Tesla, and Mitsubishi, plus ZeroCycles, Codas and several other models. Owners proudly displayed their vehicles and encouraged people to check them out. One Tesla owner even brought informational posters (shown above left) and a sample Tesla battery to display.

Another Tesla owner, Patrick Lawson, who drove five hours from Riverton, Wyoming to be at the rally, displayed his Model S with two kid-friendly seats in the trunk. He encouraged parents to let their kids test out the rear-facing seats (see below).


“I take it all over the area,” said Lawson, adding that he has also taken it as far as California and Minnesota. “The acceleration is amazing. You can pass anything, no problem. It’s quiet and it’s so smooth. I travel a lot and the supercharger network is free for Tesla owners, so I don’t have to pay for gas or charging.”

“My favorite part about driving electric is just the amazing power that you get out of this bike,” he said. “It’s got really great acceleration and it costs virtually nothing.”

The event demonstrated an overwhelming sense of how much EV owners love their vehicles. Whether it’s the savings on fuel and maintenance, the instant acceleration, the environmental benefits, or the futuristic look and feel, people can’t get enough of their EVs. 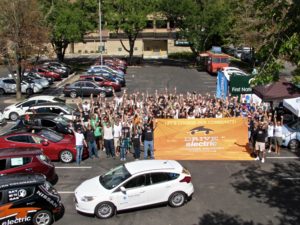 After over an hour of mingling, the EV owners and their families gathered for a commemorative photo of this achievement. With 117 people and 83 vehicles, the group set the bar high for future EV rallies in Colorado.

To conclude the rally and demonstrate the high rates of EV adoption in northern Colorado, attendees participated in a mass drive through Old Town Fort Collins. During the “EV Flash Mob”, all 83 EVs, from fleets and consumers alike, overwhelmed the streets of Old Town Fort Collins, lowering traffic noise and the smell of exhaust.

For 30 minutes the pedestrians took note of the excitement and began understanding why the Northern Colorado community is working hard towards widespread EV adoption.

As one pedestrian commented, noting the effect of lowered pollution, “It gives you an idea of what a transportation system powered by electricity would be like.” 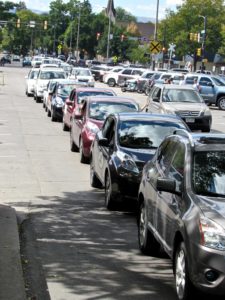 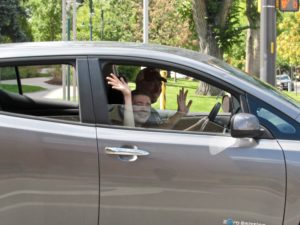 CSU, City of Fort Collins and Innosphere Partner to Host EV Charging Competition
Event Season Winds Down in a Big Way for DENC