Battery prices have declined 80 percent in the last six years. Major automakers are making commitments to electric lineups, and to technological innovations to reduce costs and increase range. Charging stations are spreading across U.S. highways and reaching rural pockets of the nation. It’s safe to say that electric vehicles are on the rise, and one of the driving factors behind this is their hold on the latest generation of vehicle owners.

As EVs continue to become even more affordable, develop longer ranges, and offer innovative technological advancements, they appeal more and more to younger ‘millennial’ audiences. We can see evidence of that right here in Northern Colorado. 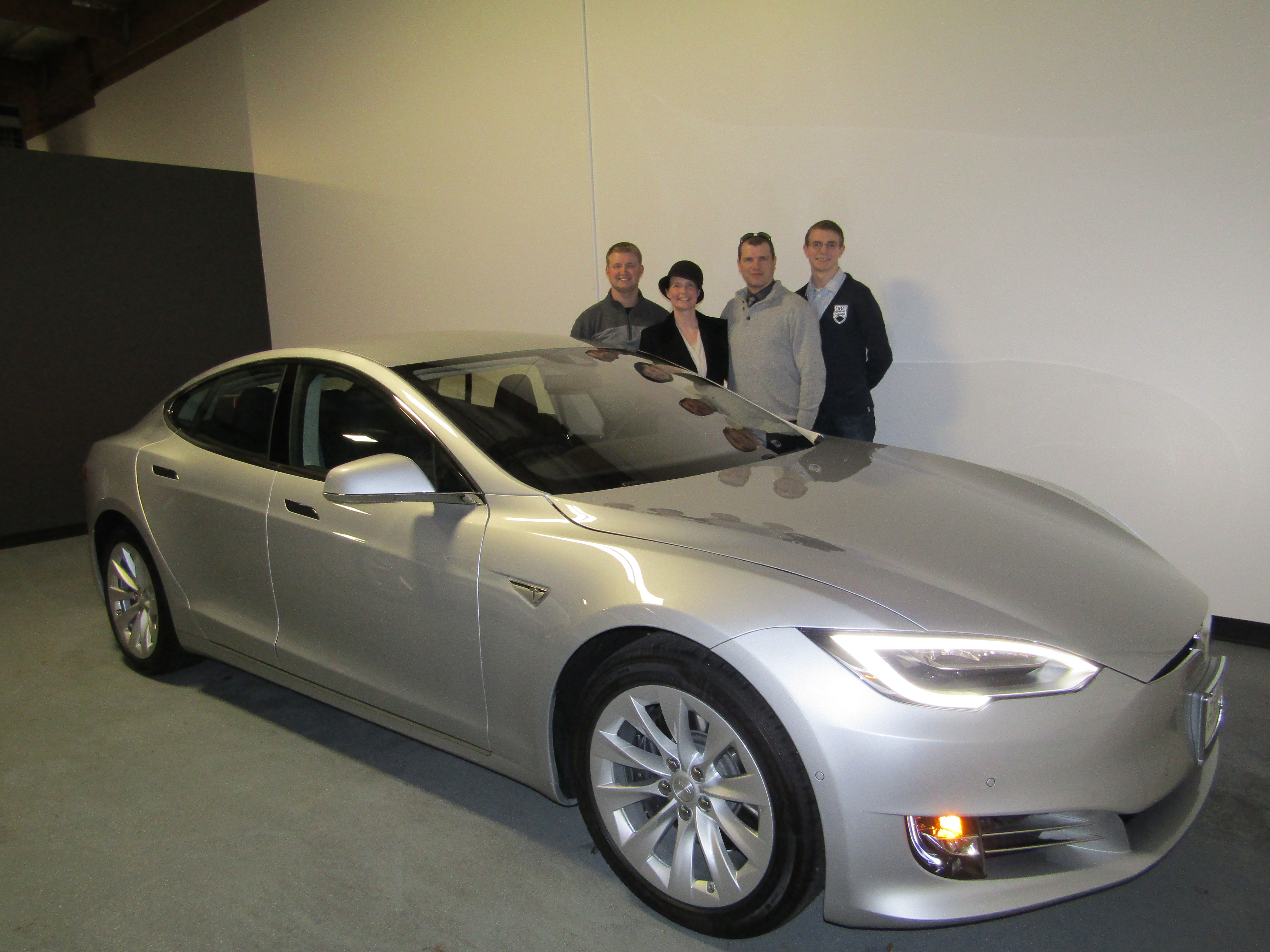 From a family of Tesla enthusiasts, Nixon (far left in above image) has always loved the Tesla brand, and drives his family’s Model S when he is home in Washington. So when an affordable model was announced in the Model 3, he was on the list. Now a reservation holder, his Tesla Model 3 is expected to arrive this summer or autumn.

A college student, it’s likely that most wouldn’t expect an EV to be feasible for someone like Nixon, but he attributes the lower cost of ownership to the affordability.

“With the money I save not paying for gas twice a week, I am actually saving more money than I would pay for a loan on a Nissan Altima (a car I almost bought two years ago). Also, the upkeep on an electric car is almost non-existent. There are no oil changes, spark plug replacements, fan belts, or just about any other moving part that needs to be fixed on a yearly basis,” said Nixon, who calculated it would save him $10,000 over the next 15 years by driving electric.

In addition to long-term cost savings, Nixon points to the environment as a motivating factor for people his age to drive electric. “Now that the charging infrastructure is here for EVs, it is forcing us to consider that how we get to work matters. We have options. We cannot afford the luxury of ignoring the environmental impacts of our transportation choices.” 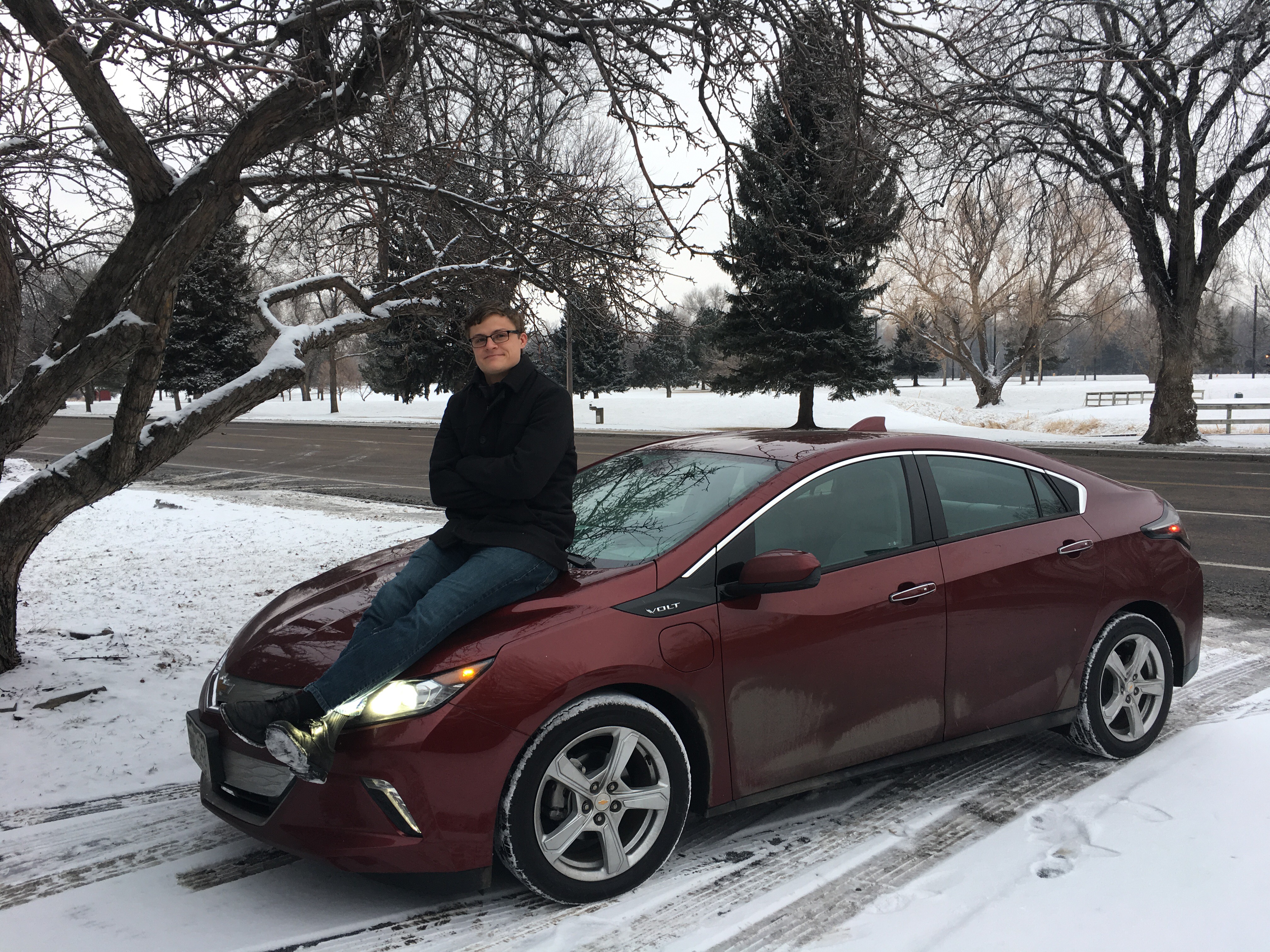 Larson purchased his EV very recently, after just moving to Fort Collins in the fall. Citing the urgency of climate change as a significant motivating factor, Larson said he feels “it’s important for citizens to support industries that can make a difference, where possible.”

“I don’t consider buying a plug-in hybrid today to be a painful act of environmental activism, because I haven’t had to make any real lifestyle concessions,” said Larson. “My car is a plug-in hybrid without range limitation, and from what I’ve seen, is more or less comparably priced to equivalent traditional models. It does everything another car could do, just at a much higher mpg.”

Interested in a Chevy Volt? Ari purchased his at Davidson-Gebhardt. 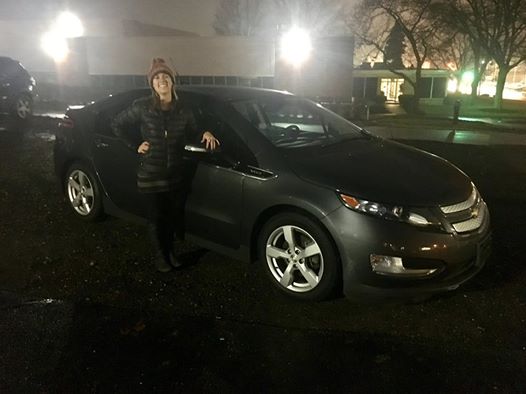 After four years advocating for EVs as a DENC staff member, Freyschlag is now ‘walking the walk’ after purchasing a used Chevy Volt just over a month ago.

“At age 24, 2016 was the first year I had considered purchasing a vehicle. Having learned about the difference between battery electric vehicles (BEVs) like the LEAF, plug-in hybrid vehicles like the Ford Fusion Energi, and range extended EVs like the Chevy Volt, it was an easy decision for which type of vehicle I would consider,” said Freyschlag.

“As a ‘millennial’ a few of my primary concerns were cost, the flexibility to travel if needed, and alleviating those concerns with owning one vehicle,” she continued. Given those concerns, she explored used Chevy Volt models. “I am confident in the engineering of the Volt as a range extended EV. This means that I will be able to drive on EV mode for 90% of my driving needs and deliberately use the gasoline range extender when I need to do so.”

After years of supporting the technology, driving electric was the only way that made sense for Freyschlag. Read more about her car buying experience, and first road trip in her new Volt here. 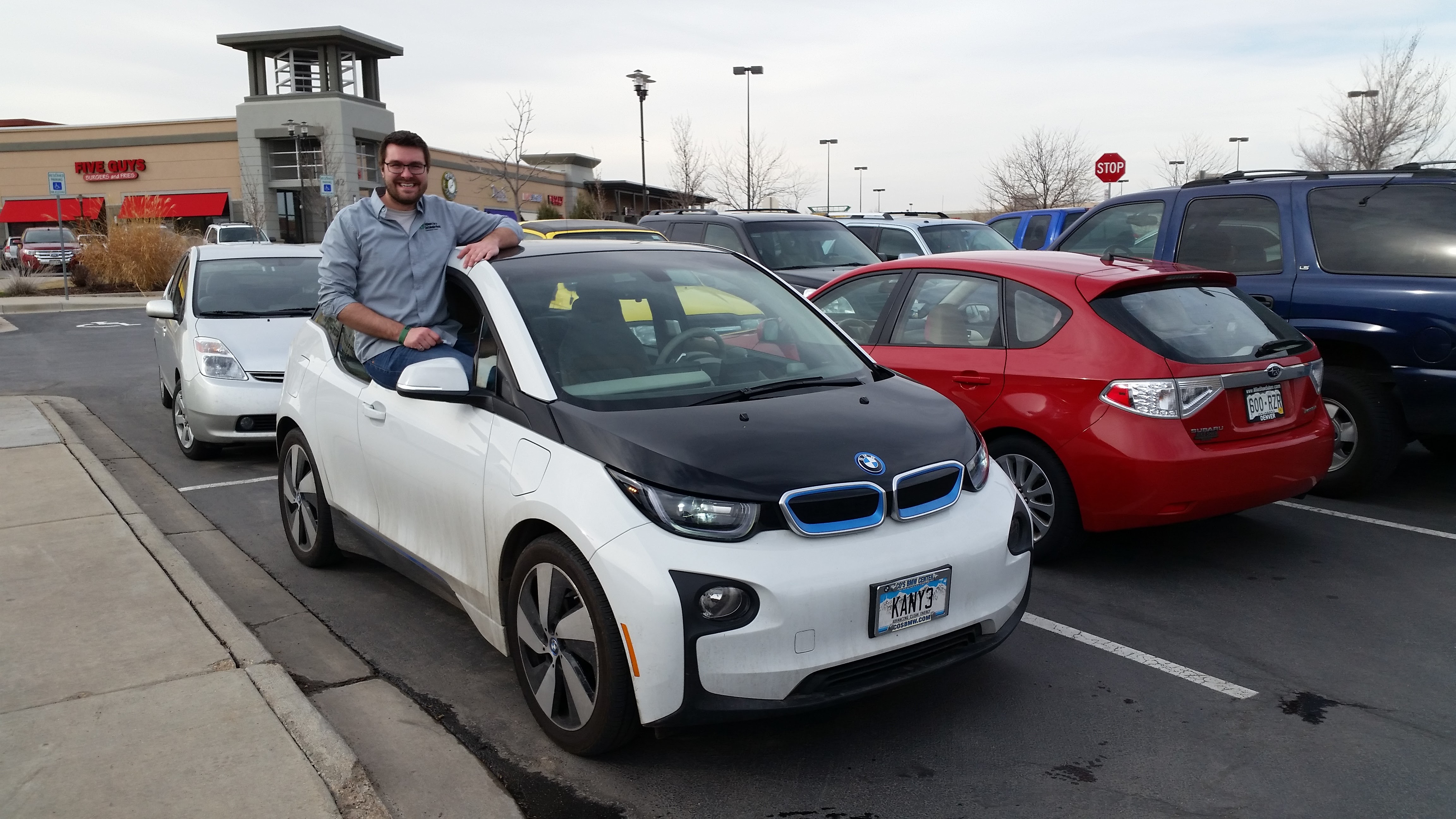 Holic purchased his BMW i3 during one of DENC’s group buy programs, which he described as the “perfect opportunity” to purchase an EV at a price he could afford.

“I went with the i3 specifically because of the BMWi program’s commitment to sustainability from top to bottom. With sustainably-sourced eucalyptus and recycled material for the dash, a carbon fiber body to reduce weight and increase efficiency, and manufactured at plants run by sustainable energy, the i3 stands above the rest when considering sustainable design,” said Holic, who has always had a passion for sustainable engineering.

You can read more about Holic’s journey to EV ownership in a former blog post here.

Interested in a BMW i3? Calvin purchased his at Co’s BMW. 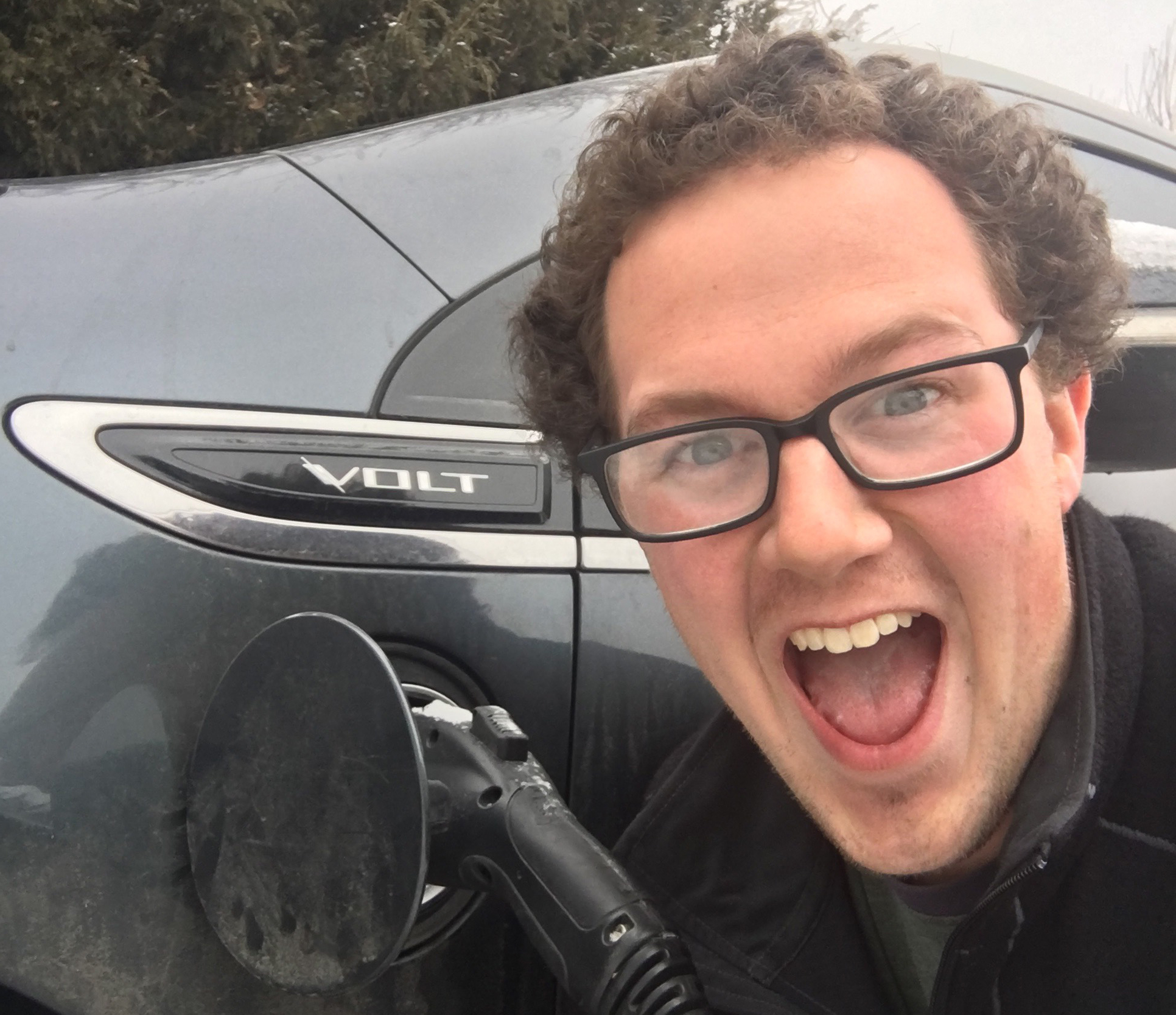 “I only go to the gas station once a month now.  Every night I plug my car in, and in the morning it has a full charge.  It’s spectacular.”

With EVs beginning to hit the used markets, Zelener saw it as an easy and exciting way to take advantage of a great price and still do all of his commuting on electric in a 2013 Chevy Volt.

For those who are considering going electric, Zelener offered some words of advice. “Go test drive an EV or make friends with someone who owns one.  It’s really hard to get a feel for EVs without experiencing them in person.  The performance they offer is amazing.  Used electrics can be found for good prices, and range anxiety is not even a concern with the Volt,” he said.

“I think the absolute best part of EV ownership, ironically, is convenience,” he continued. “And it’s just so hard to understand that without using one.  I didn’t have any idea what it would be like until I started driving the Volt on a daily basis.  I only go to the gas station once a month now.  Every night I plug my car in, and in the morning it has a full charge.  It’s spectacular.”

You might be thinking – how? How do young millennials afford electric vehicles; aren’t they expensive? In reality, these savvy millennials have figured out one of the best benefits of EVs. With the help of up to $12,500 in federal and state tax credits for the purchase of EVs, dealership deals such as the DENC group buy programs, the lower cost of electricity as a fuel source, and the minimal-to no maintenance costs of EVs compared to vehicles with internal combustion engines, the total cost of ownership of EVs is substantially lower than comparable vehicles of other fuel types. To learn more about total cost of ownership of EVs, visit DENC’s Operation and Maintenance page.

Just looking at these five new EV owners, it’s clear that EVs are enticing to the newest car buyers, be it for environmental reasons, long-term cost savings, increasing affordability, convenience, or a number of other reasons. Perhaps Zelener put it best when asked why EVs are catching on for millennial consumers:

“Who doesn’t want to be part of the future?”

If you’re curious about EV ownership, talk with an EV owner by emailing AskAnEVOwner@gmail.com. Additionally, if you’re an EV owner and would like to get involved in our program, come to our EV Enthusiast meeting on Wednesday, February 15th from 6:30-8:30pm at Snowbank Brewing.