The Road Toward Making Northern Colorado a Leader in EV Adoption

Drive Electric Northern Colorado celebrated its four year anniversary in February 2017. Over the last four years Northern Colorado has made strident efforts towards improving electric vehicle (EV) adoption by consumers and fleets. With tremendous community support and a number of components playing into this success, the region has become a nationally-recognized leader in EV adoption. 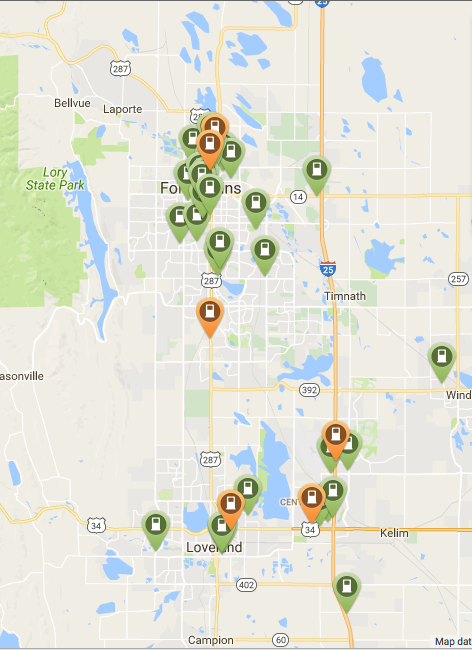 Workplaces have played an especially large role in this effort, with 21 workplaces joining DENC’s Workplace Charging Challenge, which has made EV charging available to more than 30,000 Northern Colorado employees at their workplaces. The number of Northern Colorado workplace charging partners continues to grow, with several other businesses continuing to express interest in charging installations for 2017 and beyond.

In the effort to make EV ownership convenient and affordable, a core strategy in DENC’s mission, DENC created the EV Group Buy program for our region—bringing the cost of EV purchase down to as low as 65% less than manufacturer’s suggested retail price. DENC launched its first Group Buy program in November 2015 and has since organized four similar EV pricing programs.

Across all four DENC EV pricing programs EV sales were roughly eight to nine times higher than the average EV sales rate at the local dealerships. During a Group Buy month, dealerships could expect to see anywhere from 35-50 EV sales. This impact on sales has been the largest contributor to making Northern Colorado a leader in EV adoption.

In addition to boosting sales, the Group Buys have had positive impacts on the community in the following ways:

The program has brought significant national media attention to the Fort Collins and Loveland communities, with articles in Yahoo! News, Green Car Reports, and other well-known sites in the EV world such as EVObsession. DENC has helped over 10 different cities across the nation launch similar programs. DENC has also collaborated with Southwest Energy Efficiency Project (SWEEP) and Boulder County to create a webinar on the Group Buy programs, and participated in a regional case study to further enable replication of the programs. 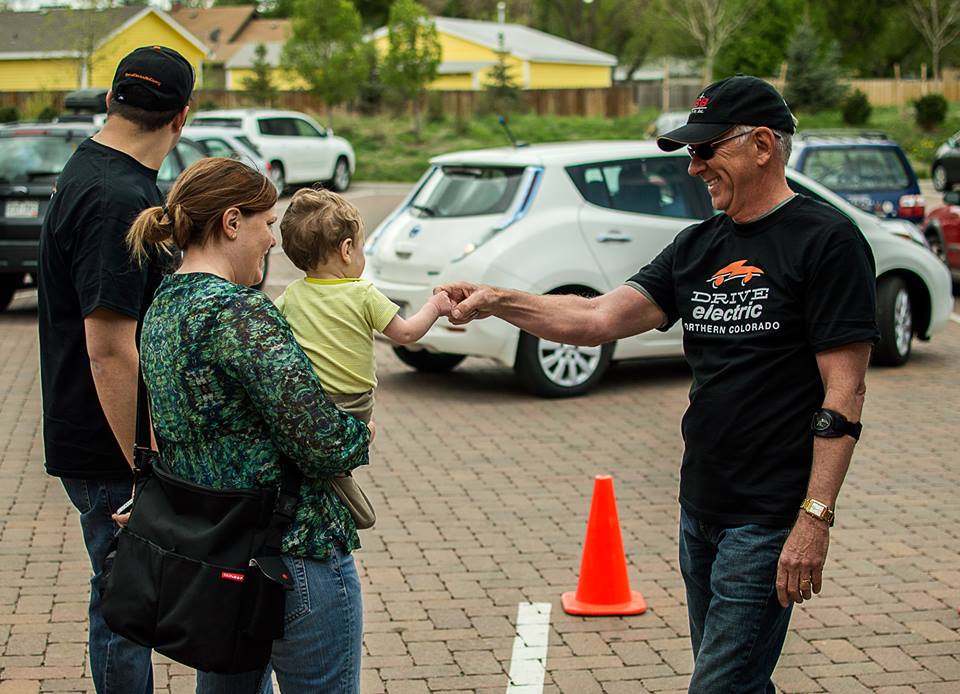 Awareness is one of the biggest obstacles facing widespread EV adoption, with 60 percent of participants in a recent survey saying they were “unaware of electric cars”. This is why one of the cornerstones of DENC’s efforts has been providing easy-to-access educational test drive opportunities. DENC has created several test drive programs to get Northern Coloradoans behind the wheel of EVs including EV rental programs, Drive Leadership extended test drives, and our most well-known test drive opportunity – Ride and Drive events. Ride and Drives offer a non-sales environment where community members can test out EVs and dispel some of the myths regarding EV ownership. Ride and Drive events have proven to be highly effective in getting people behind the wheel, with nearly two thousand people testing out an EV at one of DENC’s 82 events in the past four years. DENC survey results also show that after test driving an EV at a Ride and Drive, the number of participants who said they were likely or very likely to purchase an EV increased by 22.5 percent.

The combination of these educational tactics has increased awareness of EVs in Northern Colorado significantly. In early consumer perception surveys conducted by DENC at Ride and Drives for example, an average 75 percent of participants had never driven an EV before the event. In the most recent survey results, more than 80 percent of participants had test driven an EV, demonstrating a significant increase in overall community awareness of EVs.

Workplaces in Northern Colorado have also contributed substantially toward increasing EV adoption. From the transition of fleet vehicles to electric, to the Workplace Charging Challenge and Ride and Drives, workplace support for EVs has been a central tactic in DENC’s EV efforts.

Some of the successful local fleet efforts include The Maids, a cleaning service that adopted EVs into their fleet, New Belgium brewing company, and FedEx. 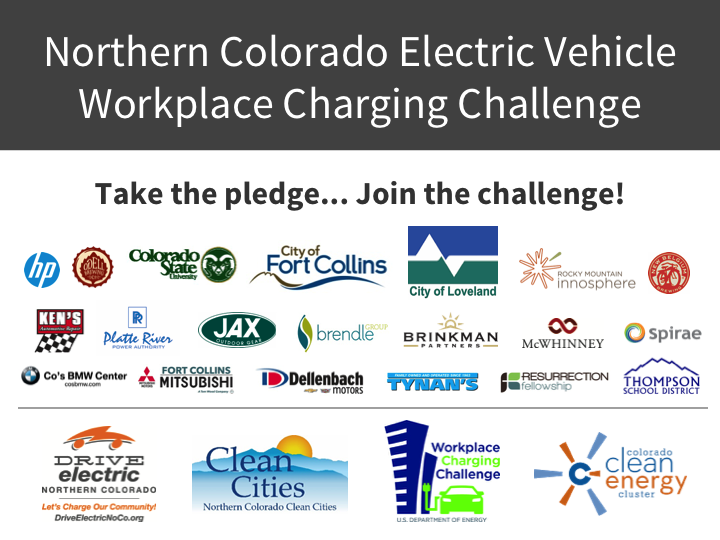 Additionally, as mentioned before, there are 21 organizations and businesses that have joined DENC’s Workplace Charging Challenge, making EV charging available to their employees.

Some businesses and organizations participate in multiple EV efforts to maximize their ability to accelerate EV adoption through the workplace. For example, Colorado State University has added EVs to its fleet, installed 24 chargers on campus, participated in DENC’s Drive Leadership program, helped to spread the word about pricing programs and Group Buys, and hosted multiple workplace Ride and Drives. Hewlett-Packard is another business that has been very involved in EV efforts–hosting an annual workplace Ride and Drive from 2013-2016, offering numerous charging stations to their employees, and educating HP employees about all four Group Buy programs.

Another major component in boosting EV adoption in Northern Colorado has been the enactment of policies incentivizing EV adoption. Colorado now has one of the strongest incentives for purchasing an EV in the nation. The Electrification Coalition and DENC have worked to support a change in this tax credit to allow the $5,000 credit to be claimed at the point of purchase. These changes now make EV ownership even easier and more affordable for Colorado residents.

Additionally the city of Fort Collins enacted its Climate Action Plan in 2015, with the ultimate goal of obtaining carbon neutrality by 2050. With the transportation sector accounting for 25 percent of carbon emissions, switching to EVs is a logical step forward. As a result the city has backed numerous EV efforts including in their role as a principal partner of DENC. Fort Collins’ ClimateWise program motivates businesses to invest in electrifying fleets, to participate in the Workplace Charging Challenge, and engage in educating their employees or customers about EVs. 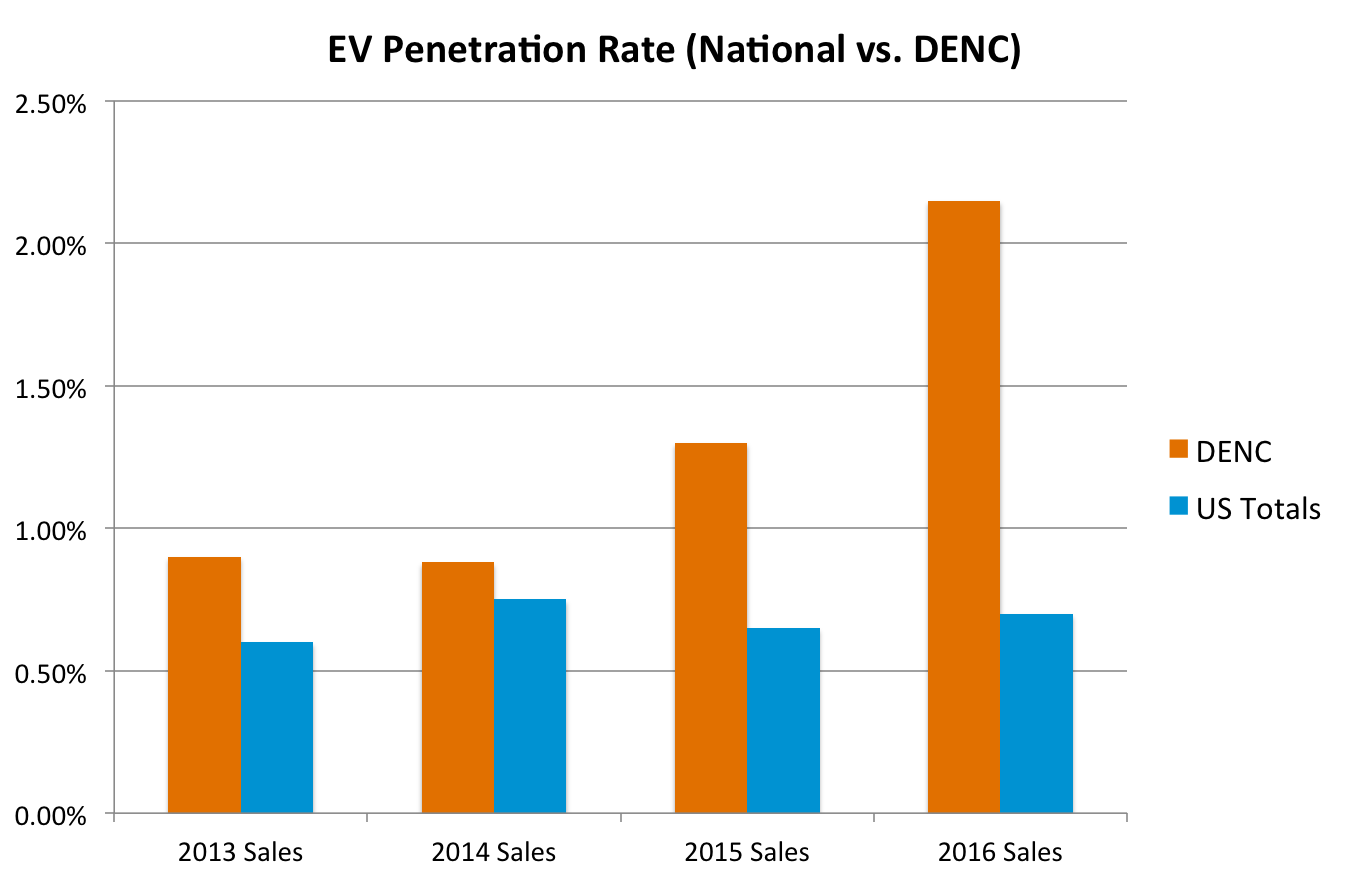 The above efforts have culminated in Northern Colorado achieving EV adoption that is three times higher than the national average, and becoming a nationally-recognized model for community-wide EV adoption efforts.