National Drive Electric Week (NDEW) is fast approaching and Drive Electric Northern Colorado (DENC) and the Northern Colorado Electric Vehicle (EV) Enthusiasts are gearing up for their third annual NDEW EV rally. This year, NDEW is September 8th – 16th and the Northern Colorado EV Rally will be held at Snowbank Brewing in Fort Collins on Sunday September 16th from 11:00am – 4:00pm. Bring your friends and your EV and help make this year’s rally a great occasion for promoting electrified transportation in Colorado. Hot dogs will be provided, there will be a DENC schwag giveaway, and Snowbank will have a wide selection of excellent craft beers on offer, as always. 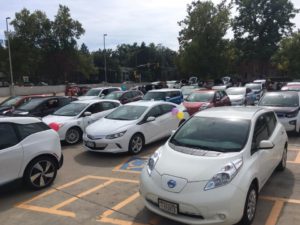 The tradition of Northern Colorado NDEW EV Rallies started with a bang back in 2016 – it was the largest gathering of EVs in Colorado history! That year, 83 EVs poured into the First National Bank parking lot in Fort Collins. 2017 also saw a large collection of EVs in the parking lot of Mulberry MAX, but the previous year’s impressive record remained unbroken. In the year since the last rally, Northern Colorado has seen many new EVs hit its roads. Sightings of the Tesla Model 3, the Toyota Prius Prime, the all-new Nissan LEAF, the Chevy Bolt, and many other EVs are becoming more common. Spread the word about this year’s rally to all of your friends with EVs and help this year’s rally surpass 100 vehicles!

While the Northern Colorado tradition of NDEW EV rallies goes back only three years, National Drive Electric Week was conceived back in 2011 and was originally called National Plug In Day. Spearheaded by Plug In America,  Electric Auto Association, and the Sierra Club, the first National Plug In Day was held on Sunday, October 16th, 2011. In 2014, the name was changed to National Drive Electric Week to better emphasize the revolutionary concept of driving electric and to offer a broader range of dates to accommodate more events. 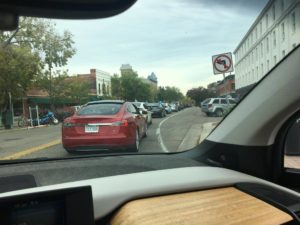 In 2011 when NDEW first began, the only two EVs on the road in significant numbers were the Chevy Volt and the Nissan LEAF. The LEAF boasted the longest all-electric driving range at the time with a range of around 84 miles. Today, there are dozens of EV models to choose from in nearly every vehicle segment and with all-electric driving ranges of up to 310+ miles. The vastly improved selection of EVs in recent years should make 2018 NDEW and the Northern Colorado EV Rally the most vibrant and diverse yet.

As the number and variety of EVs have increased, NDEW events have spread to more cities. The first NDEW in 2011 saw events staged simultaneously in 29 cities across the U.S., including Denver. The following year, the number of participating U.S. cities more than doubled and 2013 saw the addition of international cities. Since then, the movement has continued to grow as Northern Colorado and dozens of other regions and cities have caught the EV fever.

Be sure to register for this year’s event and join tens of thousands of individuals across the globe who are getting charged up for the clean, efficient, affordable future of transportation.

If you’re looking for more NDEW activities, you can find the complete list here.