The U.S. electric vehicle (EV) market will reach a major milestone in October, as automakers reach 1,000,000 total EV sales. Cumulatively, more than 992,000 EVs have been sold since January 2011 according to a SAFE analysis of data from Hybridcars, InsideEVs, and automotive industry press releases, with 110,000 EVs sold in Q3 2018 alone. 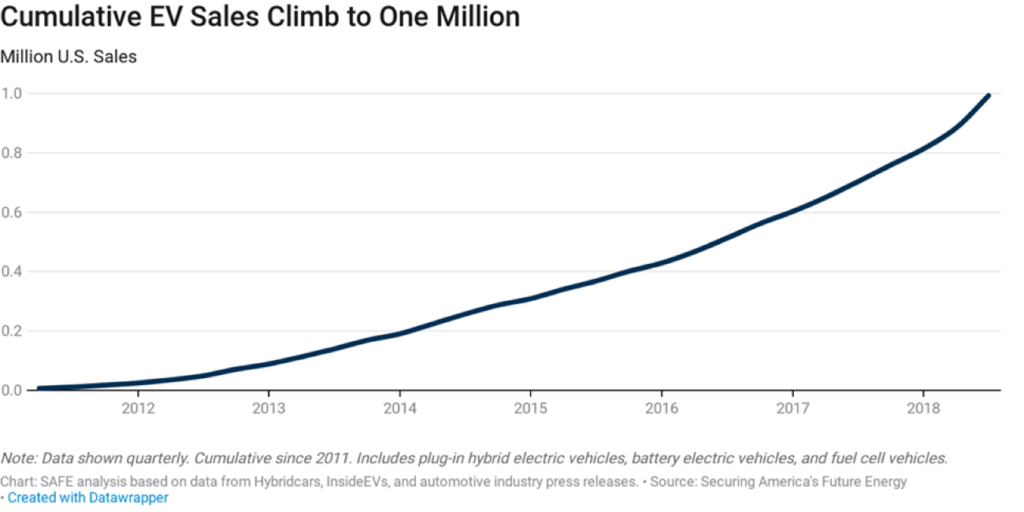 The imminent sale of the one-millionth EV is a significant milestone that brings the U.S. one step closer to reducing its transportation system’s heavy dependence on oil. This achievement is a result of tireless efforts by advocates and communities similar to northern Colorado, which exist all across the country. Buyers are realizing the value and benefits of driving electric, and there are EVs on the market that meet the diverse needs of consumers. With some of the highest EV sales per capita in the country, Colorado has played a critical role in reaching this noteworthy point. 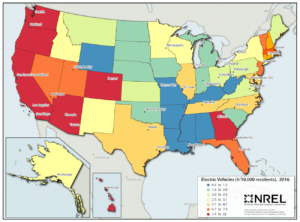 The Road to One Million

Targeted research and development, technological breakthroughs, and the ongoing expansion of nationwide charging infrastructure culminated in the decades-long movement to one million EVs. Industry leaders including BMW, Nissan, Chevy, Honda, and Toyota, expanded their product offerings and increased the range, affordability, and efficiency of their lineups. Since 2012 these investments have helped bring the average cost-per-mile of range down from more than $500 per mile to less than $300 per mile. In terms of total cost and battery size, an additional $200 per mile of savings off of MSRP indicates EVs are going further and for a lot less.

In 2018, automakers have introduced more than 46 advanced fuel vehicle models, including 28 PHEVs, 15 EVs, and three fuel cell vehicles. Nissan, Chevy, and Toyota have also been innovators in the space by adopting different strategies to broaden their appeal and win over early-adopting enthusiasts. Nissan Motor Company became one of the first major automakers to mass-produce a pure EV, introducing the LEAF in 2011. Nissan has since rolled out a 2018 model year version that receives over 150 miles of range at $29,900 before incentives. Chevy, meanwhile, introduced the Volt range extended EV in 2011, appealing to consumers who felt more comfortable with a plug-in hybrid electric and gasoline engine powertrain. The Volt dominated the market early on, but in 2012 the plug-in Toyota Prius created strong competition among PHEVs. Along with the Model 3, Tesla saw successes across its entire product line with the high-end Models S and X also ranking among Q3 2018’s top five best-selling plug-in vehicles in the U.S.

We’ve reached 1 million EVs on U.S. roads. Colorado is already aiming to put 1 million EVs on its roads by 2030, so DENC’s efforts to promote EVs in Colorado join a massive movement toward the electrification of the transportation system across our state.

If you’ve participated in DENC events in the past and own an EV, thank you for your contributions to helping reach this major milestone. We invite you to continue spreading the word about the many benefits of driving electric. If you’re new to DENC and would like to learn more about joining the electricity-powered transportation revolution, join the Northern Colorado EV Enthusiasts at one of their monthly Meetups. Veteran EV owners will happily answer all of your questions about making the switch to driving electric – and someone might even take you for an electric spin around the block.